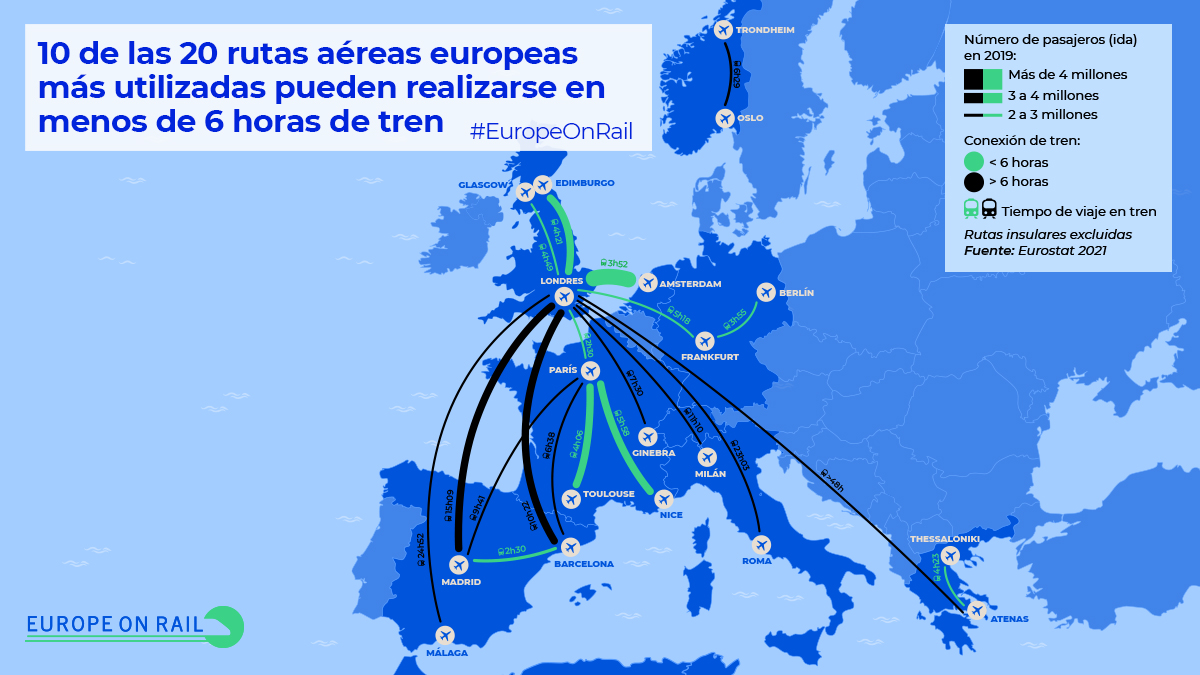 What do Spanish people think about the possibility to shift from plane to train?

41% of Spanish respondents are willing to spend more than five hours on a train, a figure which is above the European average (37%). In addition, the majority (79%) are willing to use night trains (69% in Europe)

Almost three out of four respondents (79% for Spain, 73% for Europe) think that travelling by rail should be cheaper than travelling by air on the same route

29 March 2021 – Most Spanish people are willing to shift from plane to rail, even for international trips and accepting significantly longer travel times. A trend that is in line with Europe, as shown by a survey conducted by the YouGov institute in Germany, Poland, France, Spain and the Netherlands. The report is released today on the occasion of the official launch of the European Year of Rail and in the framework of the meeting of EU transport ministers, where the issue will be discussed. The survey was commissioned by Europe on Rail, a coalition of European NGOs of which ECODES and eco-union are Spanish partners.

“An increasing number of people are willing to shift to rail, even for long international journeys. But to realise this potential, European rail transport must become more attractive and competitive compared to air travel. Transport ministers must make a clear commitment to the revival of rail in Europe“, comments Lena Donat, senior advisor for low-emission mobility at GermanWatch, which leads the Europe on Rail project.

One of the reasons behind the good acceptance of the railway is that it is a clean means of transport. Thus, 83% of Spanish citizens (73% in Europe as a whole) agree that emissions of greenhouse gases are a serious problem. Along the same lines, more than half would also support a carbon tax o make flights, as major emitters, more expensive.

In the face of this situation, the survey shows that more than half of those interviewed would be willing to switch the plane for the train (58% of Spanish respondents), 52% of Europeans. Moreover, among frequent flyers, those who fly once a week or more, 50% of Spanish people would replace at least half of their flights with train journeys, a percentage that rises to 58% in Europe. On the other hand, 41% would accept train travel times of five hours or more (37% for Europe). In addition, 22% would be willing to spend more than seven hours travelling by train to avoid a flight (23% in Europe).

On the other hand, 79% of Spanish people and 69% of Europeans would use night train services for any journey, with this option arousing great interest in all age groups. In this respect, Jérémie Fosse, president of eco-union, points out that “Recent statements by the transport ministry against night trains go against what the public, industry, other European countries and the fight against climate change are calling for. The night train is not a competitor to the AVE, but rather complements and enriches it, allowing more suitable connections for business and tourism travellers”.

Another aspect covered by the survey is intercontinental mobility. Here, almost two thirds of those questioned (61% of Spaniards, 62% of Europeans) express their interest in travelling by train in Europe, including many who have never made an international train journey before (51%). A prerequisite for this is the establishment of a fair fare. An overwhelming majority (79% for Spain, 73% for Europe) believe that train tickets should be cheaper than air tickets for the same distance.

“Train travel in Europe must be more attractive and less complicated for citizens. To achieve this, we need better direct cross-border connections between major European cities, overnight rail connections over longer distances and easy and secure booking options. In addition, fairer taxation, internalising external environmental and social costs, needs to be applied now to the different modes of transport so that rail travel becomes the most competitive alternative. European governments must lead the way for this to happen“, concludes Monica Vidal, Director of Public Policy and Climate Governance at ECODES.

YouGov surveyed 6,309 adults in Germany, Poland, France, Spain and the Netherlands in early February 2021. Of which 1,123 were Spanish.

See the overall results of the survey