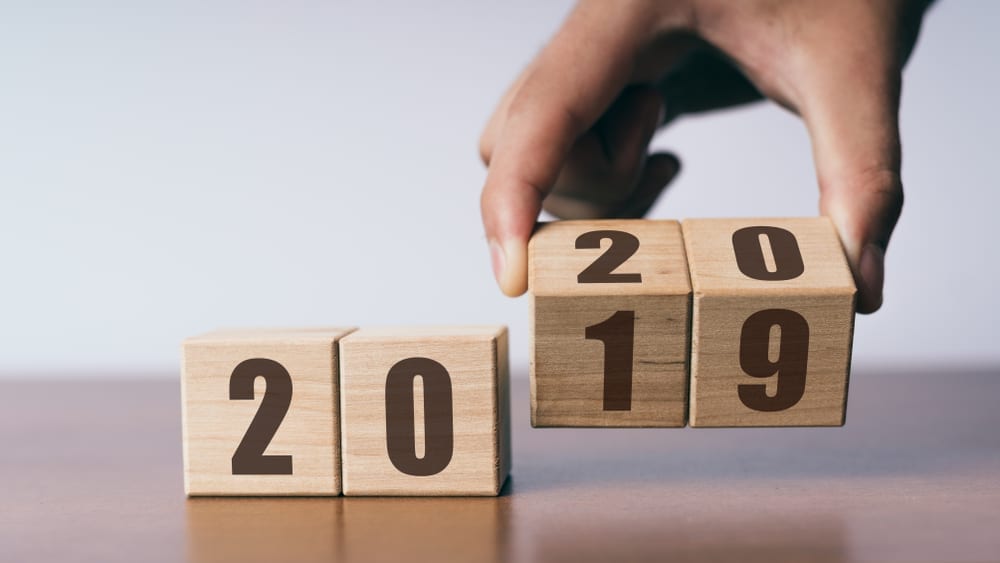 Looking towards 2020: A decisive year for the planet, our society and our common future

2019 has left us with mixed feelings. On the positive side, climate change and the protection of our fragile planet has been a global trending topic for citizens, mass media, and even (some) decision-makers, thanks to Greta Thunberg, the climate strikes and two major scientific reports: IPCC on climate and IPBES on biodiversity.

The very bad news is that the COP25 in Madrid has not succeeded in rising international climate ambitions and moving towards the end of the fossil fuel era. Unfortunately, our current policies and practices remain based on the old paradigm of economic growth without taking into account the planet’s limits and the need for social equity. In fact, despite minor progress, we are far from being on track to reach the Sustainable Development Goals by 2030 or limit the temperature increase to 1.5ºC.

As a civil society actor, eco-union aims to actively contribute to the transition towards sustainability in Spain, Europe and the Mediterranean. Additionally to the current PROSEU initiative on mainstreaming prosumers in Europe, we will start this year a new 3-year research project, financed by the EU Horizon 2020 program, to better understand, replicate and scale up the tipping points, barriers and enabling conditions to moving from fossil dependency to a renewable-based economy in major European regions.

Together with IesMed, the first cluster on Blue Solidarity Economy will be launched in Catalonia, with the aim to extend it to the whole Mediterranean. Additionally, a new report on Blue Tourism in the Mediterranean will recommend actions and policies to improve the governance mechanisms of coastal and maritime tourism which is currently putting in danger our natural ecosystems. Finally, the SICCDE project, supported by the Fundación Biodiversidad, will propose a set of indicators helping tourist destinations mitigate and adapt to climate change.

2020 will be definitively a critical year for our common future. Analysing strong and weak signals, we have identified 4 major challenges and opportunities that can accelerate the socio-ecological transition or lock us into a path of uncertainty and turmoil. From (sound) environmental governance to (post) economic growth, we cover a wide range of trends that are likely to shape our collective destiny in Europe, the Mediterranean and around. With your support we will actively follow those issues and contribute to a greener, healthier and happier society for and by all.

1. Wake up call for a healthy planet

In 2019 we have seen the biggest surge in protests and social uprisings across the globe since the beginning of the 2010s. The Mediterranean is no exception with the 2019 Algerian protests, the so called Revolution of Smiles or Hirak Movement, demanding democracy, liberties and the rule of law; or the Lebanese demonstrations, nicknamed the Tax Intifada, the series of country-wide manifestations in response to the government’s failure to find solutions to the economic and social crisis that has been looming for the past decades. Even Egypt, with its strong state repression of political opposition and civil society has seen the first demonstrations in years at the end of September.

The climate emergency actions, strikes and mass protests could be said to be part of this same panorama, where the social discontent with the way globalisation is playing out for the majority population (99%?) finds its expression in the call for climate justice. These various expressions of social discontent with the way globalisation is steered by elites needs to be taken seriously and civil society as a whole needs to develop inclusive and empowering social, environmental, and economic reforms and put these on decision-makers’ agendas. 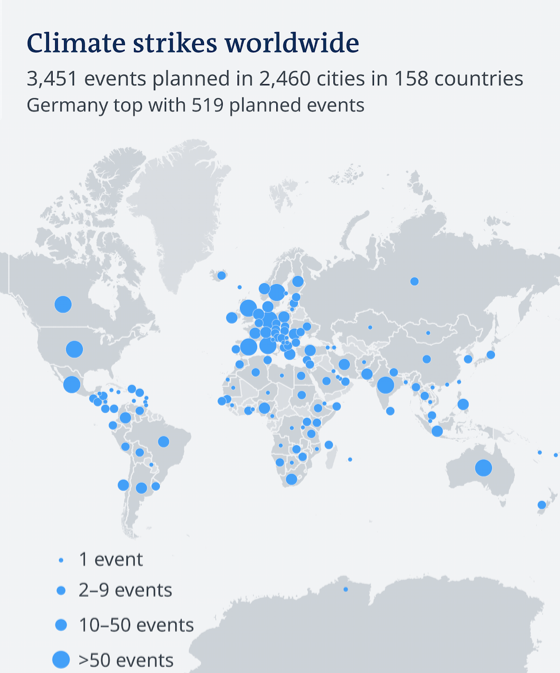 Source: Fridays for the future, November 2019

Now it is the politicians’ turn to commit through a set of major high-level summits. First, the IUCN World Conservation Congress in Marseille in June and the UN Ocean conference in Lisbon in May shall promote ambitious policies to stop the biodiversity losses. Secondly, the October COP 15 of the Convention for Biological Diversity (CBD) in China will aim to better preserve the vulnerable ecosystems that are essential for human life with the target of 30% of global surface being protected. Finally, nations must significantly increase their carbon reduction commitments (NDCs) at the COP26 on Climate Change in Glasgow to stay in line with the Paris Agreement.

Closer to us, the European Green Deal, promoted by the European Commission, is a unique opportunity for Europe to take a lead in the ecological transition, become zero-net carbon by 2050 and inspire the rest of the world to take similar actions. Let’s keep the pressure to make sure it is a real and ambitious deal.

2. The end of (economic) growth

Since the financial crisis we have been warned that economic measures aimed at structural change are essential for avoiding a new recession and all the social suffering this would entail. However, these measures have yet to materialise themselves on any significant scale. Meanwhile, the media is giving notable attention to experts predicting potential recession in the near future with the current scenario of slow growth, with a mere 2.2% global GDP increase in 2019.

The concerning issues include the global scale of private and public debt, as most advanced economies have even higher deficits and more public debt today than before the crisis, leaving few resources to boost economic growth through fiscal and monetary measures. New forms of debt are rising in emerging markets, fuelled in particular by China’s investment overseas and other new economic actors entering into the speculation game. Generally, the policy toolbox for responding to a crisis is much more limited than before the 2008 crash. In Europe, central banks are still operating with negative interest rates and there are limits to how far beyond zero they can lower it. Financial sector bailouts would also be more difficult in the current political panorama of populist movements and debt-ridden governments. In short, monetary and fiscal interventions that was used after the crisis would not have the same effect today. With the social suffering the previous crisis entailed still fresh in our collective memory, we may ask ourselves whether there is another way. A way that does not entail forcing the economy to grow, at any price, with the help of a quickly deteriorating toolbox. The mechanisms that determine economic growth in the 2020s are not the same as in previous decades.

However, the very tangible effect that lack of (sustainable) economic growth has on vulnerable groups and their access to employment and basic services remain serious, in particular in developing countries. The bleak predictions for sufficiently high growth rates indicates that it may be time to come up with new innovative solutions for making the economy more robust and less dependent on polluting and extractivist industries. A new approach for smart (de-, a- or post) growth can contribute to fight the climate crisis, guarantee social inclusiveness and allow decent job creation. Lifting this strain off the planet would also mean an opportunity to thrive for sharing better our common and limited resources. In a sense, slower economic growth might become the new normal; and good news for the planet and the people.

3. Migrant and Refugee crisis, how will it end up?

As the climate crisis escalates, climate migrants are rapidly becoming its human face. 17.2 million people had to leave their homes due to natural disasters in 2018, according to the Global Report on Internal Displacement 2019. In addition to extreme events, less sudden environmental changes also affect migration, such as ocean acidification, desertification and coastal erosion. Although gradual, this directly people’s livelihoods and their possibility to survive and thrive in their places of origin. The World Bank estimates that without urgent global and national climate action more than 143 million people from Sub-Saharan Africa, South Asia and Latin America could be displaced by 2050. This kind of prediction is nothing new, although their estimates keeps increasing and timeframes shortening.

With this in mind, although the European Parliament has declared the migrant crisis to be over, it remains an important issue in the Mediterranean. The number of arrivals have greatly reduced, from 1,032,408 in 2015 to 103,493 in 2019. However, crossing the Mediterranean is becoming deadlier. In 2015 there was one death in every 273 arrivals recorded, this number for 2019 is 78. The social, political and environmental root causes of migration in the Mediterranean are not being addressed. The decline in arrivals says more about the obstacles migrants face when attempting to enter Europe than the conditions in the areas where people emigrate. The UNHCR attributes the decline in migrant numbers is largely due to the (criticized) EU-Turkey deal, the closure of the Western Balkans route and the (questionable) EU’s close cooperation with the Libyan coastguard in order for them to intercept migrant boats. Likely because of this, Spain is receiving more migrants now than at the height of the crisis in 2015. More migrants also arrive to Greece overland now than in 2015.

The fact that the social, political and environmental reasons for displacement continue, including the war in Syria and more restrictive border management and environmental devastation, indicates that migration will continue to be an important topic in the region for many years to come.

4. Climate (change) is the New Normal

Now, in 2020 we don’t just know that climate change is happening, we experience the climate crisis. Floods, forest fires and heat waves are nothing new and climate scientists have been saying for decades that global warming should make such events more severe, longer and more frequent – this is exactly what is happening in front of our eyes and on our screens. Even if we succeed in acting on time, these kinds of devastating weather events will become even more severe.

The Climate Risk Index confirms this: Less developed countries are generally more affected than industrialised countries, as it has always been the case. However, high income countries now feel climate impacts more clearly than ever before. 2020 is the year we will be forced to wake up from our cognitive dissonance as weather patterns and climate conditions become ever more extreme. Every human being has a stake in what governments do to limit and adapt to climate change. Climate change is no longer theoretical. It is real, it is all around us, and it is going to get much worse. 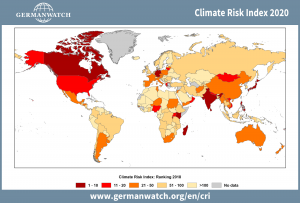 2020 is a pivotal year for the fight against climate change and for building our common future. On the institutional level with numerous high profile international summits such as the UNFCCC COP26 in Glasgow. Civil society will continue mass protests and imagining alternatives for the future. The economy will continue struggling with maintaining growth, to the detriment of the planet. On the community level climate migration is becoming ever more widespread. Finally, the state of the planet in 2019 with its extreme events, resembling a cry for help, gave us all a wake-up call. It is now or never.